Posted on November 5, 2012 by Solomon Yarjoh 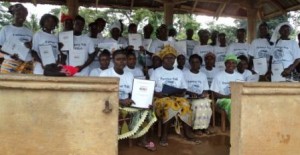 Peace Mothers with their facilitators guide

As Sierra Leone prepares for presidential, parliamentary and local council elections scheduled for November 17, 2012, civil society, the government, the security sector and the international community have expressed grave concern about the potential for electoral violence, given the history of antagonism among political parties. 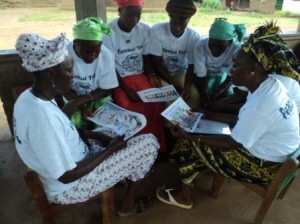 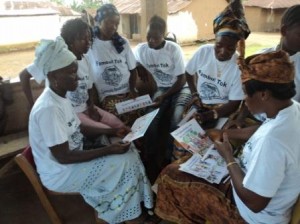 As women play a vital role in the restoration of peace and democracy during the country’s conflict, they also have the potential to be leaders for peace throughout the election cycle. 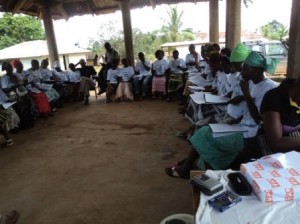 In this vein, Fambul Tok, with funds from the people and government of the United States of America, proposes to work with Peace Mothers in Kono and Kailahun and other potential civil society groups to empower women to act as leaders for peace and stability in their communities in two ways — to amplify their voices in support of peace, non-violence, and political tolerance before, during, and after the elections and to develop cooperative relationships with election authorities such as local chiefs, police and district committees monitoring political parties conduct in order to prevent and respond to election-related conflict. Peace Mothers will also have the opportunity to attend District Code of Conduct Monitoring Committee meetings to have clear knowledge on the role of the committees  and to to understand the ‘dos and don’ts’ of the Sierra Leonean Police.

Prior to the training sessions in Kono and Kailahun districts, a planning workshop was organized by Fambul Tok International – Sierra Leone to give an opportunity to different women’s groups to develop potential peace messages to be used in communities before, during and after elections. Peace Mothers in the provinces also gave input on the messages (both pictorial and verbal) in order to improve on them.

A facilitator’s guide was designed as a tool  for community peace ambassadors who will lead the process of ensuring that women participate in enhancing violence-free, fair and transparent 2012 elections. The guide includes peace messages for radio and community discussion, basic information on mediation skills, and the role of the District Code of conduct Monitoring Committees and the Sierra Leone Police.

The peace ambassadors, two from each chiefdom in Kono and Kailahun districts, are also expected to train their women folks and organize chiefdom meetings in their various communities.

Solomon Yarjoh is the Communications Director for the Fambul Tok program in Sierra Leone.
View all posts by Solomon Yarjoh →
This entry was posted in From the Ground: Program Updates from Sierra Leone, In the News, Kailahun District, Kono District and tagged Peace mothers training, peace mothers training in Kono and Kailahun. Bookmark the permalink.