Fambul Tok International, Sierra Leone announces it will launch the ‘wi na wan fambul’ (we are one family) campaign early next year. The campaign will aim to strengthen reconciliation and for all Sierra Leoneans to know that despite their political affiliations they are from one big family. 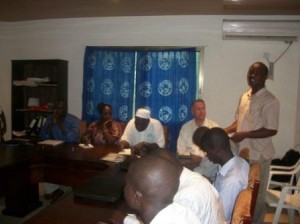 Addressing members of the press on Monday, October 4, the Executive Director of Fambul Tok International, John Caulker said the campaign is geared toward reconciliation and violent free elections in 2012.

He said the primary purpose is to serve as an early warning to electorate to take into consideration the importance of Sierra Leone above all else and also help build the spirit of the people in one united country in which all must see themselves as one family especially as elections draw closer which have already being viewed as very challenging.

Caulker disclosed that the campaign would be undertaken alongside the launching of a documentary film about Fambul Tok that tells the stories of victims and perpetrators during the country’s brutal conflict. He said the film was produced and directed by Sara Terry, an award winning photographer, and features stories of the tradition-based truth telling and forgiveness ceremonies. 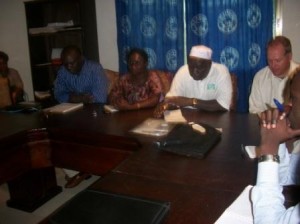 The Director of Communications, Solomon Yarjoh said Fambul Tok currently works in Kono, Kailahun, Moyamba and Koinadugu districts. He disclosed that to date 80 ceremonies have been held in 39 chiefdoms in the country.

Solomon Yarjoh is the Communications Director for the Fambul Tok program in Sierra Leone.
View all posts by Solomon Yarjoh →
This entry was posted in From the Ground: Program Updates from Sierra Leone, In the News, Organization and tagged Wi Na Wan Fambul. Bookmark the permalink.