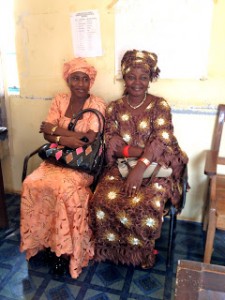 It was reported that immediately after the announcement of presidential results, provocation and personal attacks overwhelmed the community. There were reports of assault, intimidation and harassment, and daily activities came to a standstill. 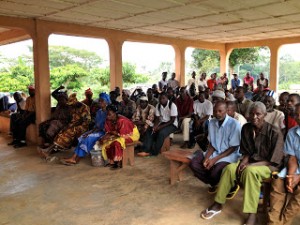 Participants of the reconciliation workshop listen to their fellow community members

Chiefdom authorities tried to restore order but could not, as they were suspected to be playing partisan politics. The Sierra Leonean Police also played a significant role to restore law and order in the chiefdom but still did not yield any tangible results.

In Ngainga village, the section chief, Tamba Kamanda, discovered that his residence had been vandalized by a group of people. Violence also erupted in Dea town as the entire township was divided between members of the All People’s Congress and the Sierra Leone People’s Party. The whole chiefdom was under siege.

It was realized that the reason for the continued violence could be attributed to two influential women who were close prior to the elections but fell out on political differences. One of them, Mariatu Tamba, is the wife of the All People’s Congress councilor elect. Kumba Sesay, the other woman, supports the opposition Sierra Leone People’s Party. Their followers were in conflict on a daily basis. 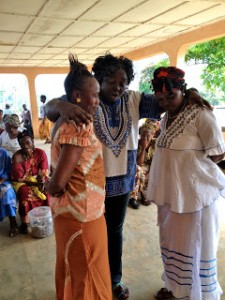 In its post-election activities in Kailahun district, Fambul Tok district staff realized that Kissi Kama chiefdom was in disarray, and even when the organization held meetings to evaluate the impact of the election, community members boycotted. Determined to ensure that the chiefdom was at peace, staff from Koinadugu, Moyamba and Freetown joined their colleagues in Kailahun to work toward the restoration of peace in that key part of the country.

As the situation deteriorated, the Paramount Chief and chiefdom authorities called their usual monthly meeting to discuss how to tackle the problem, as different approaches had earlier failed. Fambul Tok used their December 5 meeting to prevail on conflict parties to be at peace since elections are now over.

The two women, Mariatu and Kumba, were given the floor to express whatever they had in mind. The atmosphere resembled that of traditional bonfires, and also gave the community the opportunity to participate in the resolution and administration of their chiefdom.

After a very tense session, Fambul Tok National Coordinator of Peace Mothers, Micheala Ashwood, called for a cooling-off period. She asked the conflicting parties to come forward, swallow their pride and reconcile. Micheala went on to cite the example of the recent meeting of newly reelected President Koroma and the leader of the opposition Sierra Leone People’s Party, Julius Maada Bio, at the Statehouse in Freetown, adding that if those two political heads had met to show they are committed to peace, there is no reason why the people of Kissi Kama could not also emulate such practice. She asked them never to allow themselves to be divided again, and to work in the spirit of reconciliation and development of the chiefdom.

Both Mariatu and Kumba reconciled and used the meeting to appeal to their followers to bury the hatchet as elections and move forward together.

After the reconciliation, the whole township of Dea went into jubilation. Mariatu and Kumba were once again seen as sisters as they walked together amidst their neighbors’ dancing.

As a commitment to the peace, Mariatu decided to withdraw an assault case she earlier brought against Kumba at the Kailahun Police station. They hired a motor bike from Dea town to Kailahun, and when they were spotted by villagers, there was thunderous applause as the community witnessed Mariatu and Kumba riding on the same motor bike.

The reconciliation was seen as  a very big relief for the chiefdom and the entire Kailahun district. To culminate the occassion, Fambul Tok also organized a reconciliation football match in Dea and a disco at night on December 5, 2012, in which the entire community joined to rejoice.

Solomon Yarjoh is the Communications Director for the Fambul Tok program in Sierra Leone.
View all posts by Solomon Yarjoh →
This entry was posted in From the Ground: Program Updates from Sierra Leone, In the News, Kailahun District. Bookmark the permalink.