Apology and forgiveness in Koinadugu 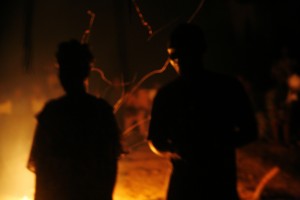 “Former Revolutionary United Front (RUF) abductee, Momodu K has asked family members of the late Madam Danka Kamara to forgive him,” begins an article from Sierra Leone’s Concord Times from May 31, 2010, as seen on AllAfrica.com.  The article continues:

“During Fambul Tok’s bonfire in Mamuduya village, Kamba section, Folosaba Dembelia chiefdom, Koinadugu district, Momodu told the gathering that he was abducted by rebels and forced to carry looted items to the chiefdom headquarter town of Musaia.

He confessed that on arrival in Musaia, he was given an AK 47 gun and forced to kill her mother-in-law. “I was given the rifle and ordered to shoot her in the head but when I refused I was threatened with death,” Momodu confessed.

He continued: “I placed my finger on the trigger and shot her in the head, she died on the spot.” Momodu said after the incident, he escaped and returned to where his wife was seeking refuge.

“I did not tell family members the true story but lied that rebels killed her,” Momodu said adding, “I had kept it secret for the past years since nobody saw me. I did not even disclose it to her daughter (my wife) that I was responsible for the death of her mother.”

Momodu said he felt guilty in his quiet moment when ever he remembered that day. He asked family members to forgive him as he was forced to do the act.

One of the brothers of the late woman was shocked and did not want to shake hands with Momodu. He told the gathering that he had heard rumours that Momodu was responsible for the death of their mother but did not believe it until the bonfire where the perpetrator confessed.

Momodu’s wife who cried bitterly however appealed to the family to forgive her husband.

Fambul Tok’s reconciliation committee intervened and the family, without any condition, agreed to forgive Momodu.”

Libby Hoffman is the President of Catalyst for Peace, Producer of Fambul Tok (the film), and a co-founder of the Fambul Tok program.
View all posts by Libby Hoffman →
This entry was posted in From the Ground: Program Updates from Sierra Leone, In the News, Koinadugu District, Updates by District and tagged ceremonies, Fambul Tok, Koinadugu. Bookmark the permalink.