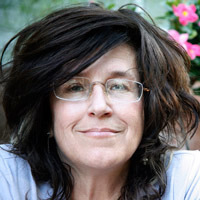 “Fambul  Tok” is Sara Terry’s first feature-length documentary. A former, award-winning  reporter for the Christian Science Monitor (and founding member of  Monitor Radio, the Monitor’s public radio  program), Sara Terry  made a mid-career  transition into photojournalism and documentary photography in the late 1990s.  The focus of her work since then has been in post-conflict societies. Her  long-term project about the aftermath of war in Bosnia — “Aftermath: Bosnia’s  Long Road to Peace” — was published in September 2005 by Channel  Photographics. Her work has been widely published and exhibited at such venues  as the United Nations, Moving Walls/Open Society, the Museum of Photography in  Antwerp, and the Leica Gallery in Solms, Germany. She is the founder of The  Aftermath Project (www.theaftermathproject.org) a non-profit grant program that  helps photographers cover the aftermath of conflict.

return to top of page